A NEW ADDRESS in the heart of the 9th Arrondissement Paris. IX. The smallest of the capital’s twenty districts, but also the most densely populated, the most compact, and the liveliest. It is also the most mysterious. The district that Parisians are now taking the time to (re)discover. Cut in two as it is by the Grands-Boulevards, which hark back to the hard times and the literature of the 19th century, and which bustle with life at all hours of the day and night. A small area encompassing a veritable Monopoly board of chance encounters and daily necessities, which is the embodiment of the very essence of Paris. The Opera Garnier. The Galeries Lafayette. The Printemps. The theatres. The Drouot auction house. Cinemas. Banking, finance. The press. Grand hotels. And, by far the most Parisian of squares, the Place Vendôme, the Rue de la Paix, jewellery and luxury stores, that lead down to the Tuileries, the Madeleine…. The ninth district of Paris has its own unique atmosphere. In a word, it is inspirational…

RUE DU HELDER An Exclusive Address The Rue du Helder, which dissects the urban triangle surrounded by the Opera, Richelieu-Drouot and the Chaussée d’Antin from north to south, is no ordinary address. Originally a fort, it was transformed over time into a fief. That of the Parisian high society of the Right Bank which had taken up residence on the Chaussée d’Antin. Noblesse oblige. A bygone world that nevertheless lives on in print. This is where Balzac, who lived in the XVIth district, despatches Rastignac to confront the elite and to learn how to put on airs and graces. This is where Alexandre Dumas, fierce inhabitant of the IXth district, chose to locate the Morcerf family in The Count of Monte-Cristo. From town houses to hotels for tourists – the Rue du Helder has undergone a complete metamorphosis.

THE CHESS HOTEL A timeless Refuse Unusually, the Chess Hotel is now located above street level. By relocating its reception to the first floor, “The Chess Hotel” has placed itself above the fray. This is not a concept, but an actual place where guests can unwind far from the frantic pace and agitation of the GrandsBoulevards. “The Chess Hotel” moves its pieces elegantly with the sole strategy of creating a relaxing environment for travellers. No bishop’s diagonal is required to lay out the codes of access and practice. There remains the two-tone reference of a few sophisticated white and black highlights placed here and there in the manner of reminders and aesthetic and stylistic allusions by Gilles & Boissier, who have successfully penetrated the universe of Parisian hotels thanks to the Compagnie Hôtelière de Bagatelle.

THE CHESS HOTEL An Exercise in Hotel Design Four stars. Fifty rooms. Eleven on each differently coloured floor. All different and all calm. “The Chess Hotel” takes trends one step further by an unexpected sideways move. On the chessboard of the project, the daring gamble was to offer Dorothée Boissier and Patrick Gilles carte blanche. In other words, Gilles & Boissier, with their vast experience working on megaprojects in all four corners of the world, were now faced with a challenge, that required them to apparently change register. The redesign was in fact a silent affair. And for the duo of  architects, who are also designers and decorators, it represented  an opportunity to complete a project of a different scale close to the Opera, which in their words was “a synthesis of our arts”. Charlotte Perriand, never far away … In fact, everything, from the lighting fixtures to the beds, from the curtains to the work stations, was designed ad hoc. Down to the slightest detail, without betraying either their tastes or their specifications. With the one exception of the armchairs in the lobby, which were designed by Christian Astuguevieille. A friend. To this precision work, which was forced by the configuration, was added the need to take into account the need for travellers to unpack their bags in a relaxed and peaceful atmosphere in  which they can switch off. Or how to reinvent classicism 3.0.

GILLES & BOISSIER Their First Hotel in Paris We might have expected to find them working on an extreme luxury hotel. But they preferred to embrace the Paris hotel sector, which is currently undergoing a complete revolution, to work on this more intimate project. For their first Paris hotel “The Chess Hotel”, Gilles & Boissier opted to juxtapose a thematic neutrality with “Parisian” counterpoints. As lovers of oxymorons, they were immediately won over by “The Chess Hotel” project, which is, by its very nature, an oxymoron. Starting with its decision to avoid the limelight. They couldn’t move any walls, so it was the rules of the game that they had to bend, reinterpret, review, rearrange, which in fact was fine by them as it is something they love doing. Walls and whispers – everything was completed, designed, delivered with minimum disruption behind the five-windowed Haussmann façade, and the wrought-iron canopy. The original idea? Just a desire for silence. And that of a return to traditional hostelry, which understands the art of how to receive and take excellent care  of its guests; the expression of good living and savoir-vivre that is not restricted by the amount of space available. 21st century luxury à la française is quite capable of overcoming constraints.

THE CHESS HOTEL Contents Gilles & Boissier are experts in the art and manner of effortlessly judging the degree of theatricality required in public spaces and the intimate opulence of private spaces, and this is exactly what they have done with “The Chess Hotel”. Lovers of intense emotions mixed with charm, they describe a project that was sentimental, well-crafted and carefully implemented, as if it was their own home.

CHESS Gallery… Neither art-hotel nor gallery-hotel. “The Chess Hotel” is a very Parisian, very new hotel, juxtaposing the original decor with works by invited contemporary graphic and fine artists to create a modern vibrant atmosphere. Gilles & Boissier enjoy working with three artists for both their “public” and private projects. Alix Waline, Victor Ash and Cyprien Chabert were all involved in the decor of “The Chess Hotel”. The first decorated the entrance  with an all-encompassing mural. The second created the owl mural in the first-floor lobby with its black and white tiles up to the molding. Immense. Hypnotic. Symbols – the night, the protection of those who sleep there, and that of yang. Another oxymoron… The third created the botanical murals of the inner courtyard, the graphics of the carpets in the corridors and her plant life made a very discreet entry into the bathrooms.

WELL-BEING SERVICES Relaxation and beauty at the Spa Aquamoon These ladies enjoy privileged access to the Spa Aquamoon Vendôme. The ideal way to enjoy a moment of well-being just a few minutes walk from the hotel, in the prestigious Place Vendôme. And a range of facilities. 2 pools, a large steam room and a sauna, before heading to the relaxation room to sip a herbal tea. The Spa Aquamoon offers treatments for the body and the face, meditation and yoga sessions, and a range of beauty treatments. Select f itness at the “Usine” Guests at The Chess Hotel benefit from exclusive and privileged access to the very chic sports club “L’Usine”, a fitness, sport and well-being hub just 250 metres from the hotel. Access to all their  classes and equipment (sauna, steam room, …).

SAMPLING THE HOTEL’S CULINARY DELIGHTS So Chic, So Chess As is the case all around the world, Paris is keen to encourage a discerning outside clientele to savour the culinary delights of its starred hotels. Breakfast. Tea Time. Snacks. “The Chess Hotel” maintains this tradition and its raised ground floor is open without restriction to Parisians keen to rise above the ups and downs of everyday life, whether it be for a morning café-croissant, or a glass of champagne in the evening by way of apéritif or digestif. GILLES & BOISSIER An exclusive inventory He is Gilles. She is Boissier. He started his career with Christian Liaigre. She first worked for Philippe Starck. Everything separates them and everything brings them together. Since 2004, Dorothée Boissier and Patrick Gilles have pulled together as a duo, being complementary to the point of merging. Better still they are dynamic. A phenomenal, worldwide success. From their Paris agency, Gilles & Boissier have managed to impose their imprimatur from New-York to Dubai, from Beijing to Las Vegas, from Saint-Tropez to the Petit-Palais. They were responsible for the Moncler stores. And the Hakassan restaurants. In 2015 they will be working on projects Manhattan, Marrakech and Mexico City, for the Four Seasons, Mandarin Oriental and Baccarat Hotels. Without doubt, five stars. In the meantime, in January 2014, they designed and launched a collection of furniture and light fixtures Gilles & Boissier Privé, and over the course of the year were present, for the second time, at the “Exposition-manifeste AD Intérieurs”, at the Arts Décoratifs. http://www.gillesetboissier.com/ 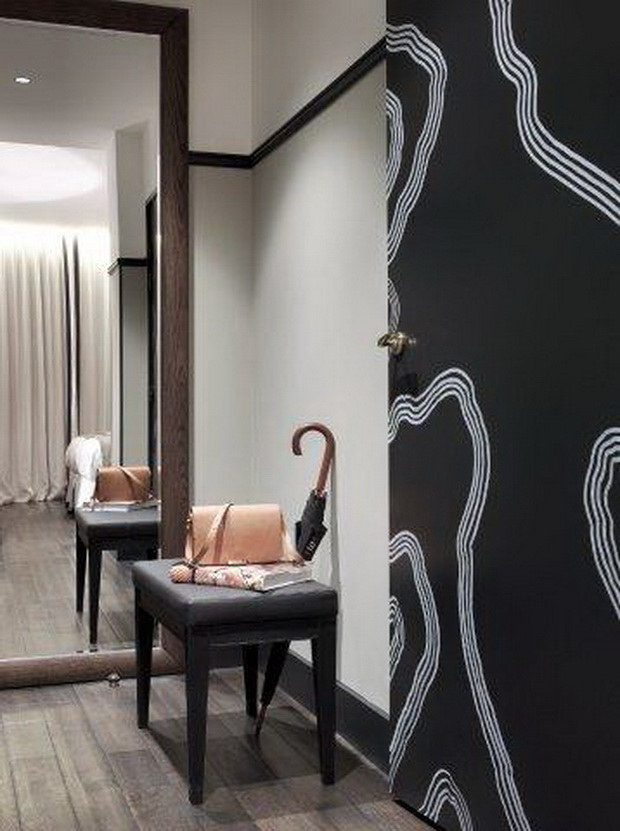